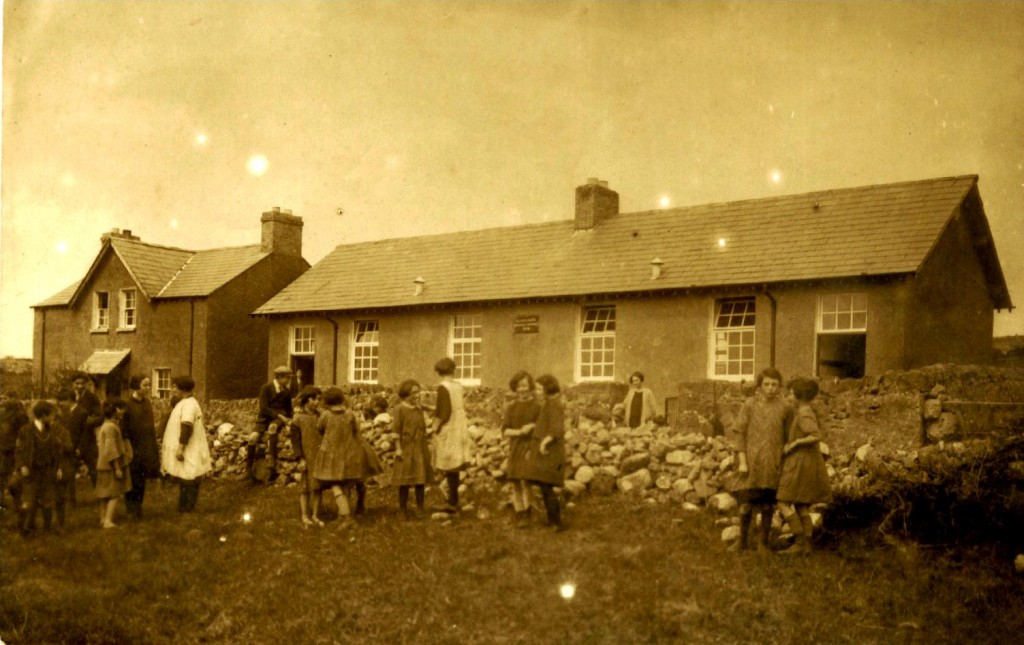 As a follow up to our last post on learning about Local History from old School Roll Books, in a stroke of sheer co-incidence, the English couple mentioned in the post have just made contact with our school principal. They have recorded the whole incident of tracing their family roots in the locality and have given permission to share their story here:

During the summer of 2010 our sister Leila was returning to England for a holiday from her home in Cape Town. As part of this holiday the family (sister Coleen and her husband John, brother Jim and his wife Wendy) decided that it would be nice to travel across to Ireland and try to find where our father James had been born and raised. (Our father never talked about his life in Ireland, we only knew that he left as a young teenager and to our knowledge at that time never returned). The only information we had was a very faded birth certificate which showed that he was born in 1902 at Carrowkeel, Co. Sligo.

A Carrowkeel was found on a map and we booked a cottage at Inishcrone for our stay which we believed was close to Carrowkeel. It was only when we started our tour of Co. Sligo that we realised that there are many Carrowkeels around. The Carowkeel we had originally identified was in fact one of the ancient megaliths in the Slieve Gamph Mounts, however what a fantastic view from up there! We visited the Reference Library in Sligo City and a very helpful assistant gave us access to the 1901 and 1911 Census.

From the 1911 census we found our fathers name along with the names of a younger brother, John, older brothers and sisters Ellen, Patrick, Malachy, and Bridget along with our Grandmother and Grandfathers names, Bridget and Patrick. Looking at the 1901 census also showed older brothers and sisters Annie, Cathleen, Agnes, Thomas and Margaret. Shown on the census in the House and Building Return was that their place of residence was Carrowkeel in the Parish of Kilmacowen and that they lived in a stone or brick dwelling with two rooms and one window in the front. In 1901 there were 10 occupants in this small house and in 1911 this was down to 8 occupants.

Further research at the library into the ‘Valuation of Tenements’ we found reference to a Thomas Brennan who rented about 6 acres of land from the Earl of Erne. This turned out to be our Great Grandfather (more about him later). From the reference library we made our way to the Registry Office of Births, Marriages and Deaths and asked if they could get us a clearer copy of our fathers birth certificate and any information on the other names we had come across at the library. We were somewhat surprised when birth certificates for all the above children were produced and a marriage certificate for our Grandparents which showed that they were married in a Chapel at Coolera, and even more surprised when the lady asked us if we could return in a couple of days as she thought that there maybe other members of the family she could identify but would need to do some research into this for us.

We had been unable to find a “Kilmacowen” or “Coolera” on our map so we returned to our cottage. The next day we called to see the local priest to enquire if he knew of a Kilmacowen. He was having breakfast with the postman and he remembered delivering mail to a Kilmacowen out towards Strandhill. Armed with this information we headed towards this area, eventually arriving outside Ransboro National School. As we had been lucky in our research so far we thought there might have been an outside chance that our father had attended this particular school, it being in the right area. We met with the head teacher Siobhán Clarke who kindly looked through the old school records for us but unfortunately no record could be found.

We carried on to Strandhill and once again approached the local priest to see if he could help us. He had only just arrived in the area but he directed us to an elderly couple who lived across the road, his comment being that ‘when God is on holiday they take over’ as they know all about the area and its goings on. Sure enough they had heard of the Brennan family and knew of the Chapel at Coolera and the parish of Kilmacowen to which they directed us. It really felt as if we were homing in on our ancestry at this time. We found the Chapel (which has now been converted into a private residence) and then proceeded towards Kilmacowen.

Eventually we came across a graveyard at Kilmacowen (by this time we had looked around many graveyards on our travels without any success) and finding no trace of Brennan on a grave stone were about to leave when Leila and Wendy for some reason stopped and turned around, they were standing next to our grandfather and grandmother’s grave, along with their son John (our uncle) and his wife. What a revelation this was! This made the trip to Ireland well worthwhile. Needless to say a few tears were shed. We also noted that the grave seemed to be reasonably well tended. Knowing that we had indeed found the right area we proceeded to try and find a place called Breeogue which was shown on our grandparents marriage certificate as the place of residence of our grandmother (originally called Bridget Hunt).

Our journey took us down some small and narrow roads which eventually ended up with us at a dead end in a small farmyard. As we were turning around the farmer appeared and we got in conversation with him. He told us that he knew the Brennan family, knew where they lived, and knew of our grandmother who was known locally as Biddy Brennan. We were a little sceptical of this information until he mentioned John Brennan and his brother Malachy at which point we realised we had stumbled upon a fantastic find. This gentleman accompanied us back to the graveyard and also pointed out another grave belonging to the Hunt family which we believe may be that of our great grandfathers brother. He also took us to a plot of land where the building our father grew up in and mentioned in the census used to be (it has long since been demolished) however a local elderly couple who now own the land remember it being there.

Just along the road from this land is the local school where our father would have walked to. A further journey and a derelict cottage was shown to us in Breeogue which was the home of our grandmother. What a find for us was this gentleman to show us all this, (we still keep in touch with him). The following day we returned to the Registry Office and the lady had found birth certificates for a further 3 sisters, Bridget, Mary and Annie. So from knowing very little of our fathers family we now know he had 12 brothers and sisters. Now our story gets interesting.

On our last day in Co. Sligo and on our way back to Dublin to catch the ferry home we called at the graveyard in Kilmacowen to say farewell to our ancestors, and whilst there we tied a note to the gravestone giving our names and telephone number in case anyone looked after the grave (as we said it looked well kept) although it was more in hope than expectation. As we were about to board the ferry in Dublin our daughter at home phoned us to say that our cousins Mary and John where on the phone as they stood at the graveside reading our note.

Mary and John are two of the children of John Brennan and they were visiting the grave for the first time in 4 years! John lives in Copenhagen and had come across to see his sister Mary who lives in Co. Meath and they had decided to drive across to visit the grave. A truly remarkable end to a week in Co.Sligo. Since this visit we have now met up with many of our cousins, and their families which until our visit we did not even know existed. One of our cousins has also done some research into the Brennan family and tells us the following:-

Our great grandfather Thomas was a school teacher, and family folklore has it that some of our ancestors were so-called ‘hedge teachers’. At a time when it was illegal for Catholics to get a catholic education, hedge schools flourished throughout the country. They were illegal and were housed in barns, caves or even outdoors with just some trees or hedging for shelter against the elements. The pupils had to pay a small amount towards the teachers wages.

By the time my great grandfather was born in 1816 most of these anti Catholic laws had been repealed so when it became his turn to enter the teaching profession he was able to teach in a proper one-roomed schoolhouse. This was the school in Kilmacowen. Sadly it is reported that Thomas Brennan was dismissed in 1870 with two years salary in settlement and with him the teaching tradition came to an end.

Our grandmothers cousin Margaret Devaney from Kilmacowen (I believe there are still Devaneys living in the area) boarded the Titanic in 1912 aged about 19. She was going to America to join her brother and two sisters. She survived the sinking of the Titanic and was also instrumental in assisting the crew to save one of the lifeboats.

Our aunt Agnes was to have sailed from New York to Queenstown on the RMS Lusitania in 1915 together with her friend. She waited at the quay but her friend never turned up so Agnes decided not to board the ship. The Lusitania sailed without her, but was sunk by a German U-Boat as it made its approach to Queenstown.

Agnes’s granddaughter Kathy Payne was a flight attendant with TWA. She was to have flown on TWA 800 on June 17th 1996 but rang in sick the day before. TWA 800 crashed shortly after takeoff from JFK to Paris with 230 passengers and crew on board. There were no survivors.

This was our Uncle and younger brother of our Father. His biggest passion was traditional Irish music and he played the tin whistle and concert flute. He was talented enough to play in one of the leading Ceili bands of the 1930s and 1940s, the Kincora Ceili band. He made a few recordings and was always composing music. One of his compositions, John Brennan’s Reel,  has been recorded by many artists:

We at Ransboro National School wish to express our gratitude to the Brennan family for sharing their family history with us and allowing a series of history lessons for pupils to become alive and real.