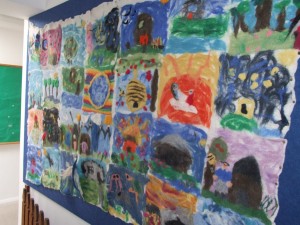 The Design & Crafts Council of Ireland’s CRAFTed programme gives primary school children and teachers an exciting opportunity to explore their creativity and learn new skills by working with professional craftspeople.

In 2015 our school was fortunate to be accepted onto this scheme again and the craftsperson who worked with our class was Susan Basler. Susan has a business called Subadesigns and is based in Westport. She mainly works with felt and embroidery.

Initially the third class teacher, Serena Doohan, attended a number of meetings in the Sligo Education Centre before Susan came into work with the pupils. As 2015 was the 150th anniversary of the birth of W.B. Yeats each school involved in the CraftEd project in Sligo were basing their work on the poetry of W.B Yeats.

As this was a collaborative project between the artist, teacher and children we discussed each step of the process. We began by choosing to focus on three poems: The Lake Isle of Innisfree, He Wishes for the Cloths of Heaven and The Song of Wandering Aengus.

In week one, we analysed the three poems and the children drew pictures based on the poems. In week two the artist demonstrated how to create a picture using felt. The children loved this new method and enjoyed the process. In week three each child focused on a scene from one of the selected poems and represented it using felt. It was amazing to see everyone’s different take or perspective on the poems.

In the final two weeks of the programme, the pupils had to mesh their own picture together using a sheet of bubble wrap and hot soapy water. As a class we then decided what pictures looked best placed together for the final hanging. It took a few hours to get each felt picture to mesh properly onto a large white piece of felt.

A group of children from the class attended the presentation evening in the Sligo Education Centre. They described how our project was carried out and thanked the artist for working so hard with us. Overall it was an amazing project and everyone learned a lot from taking part. The completed felt piece is currently on display in the school corridor.