It is a long-term programme that introduces pupils, teachers, parents and the wider community to the concept of an environmental management system. It fosters a strong sense of citizenship and leadership among participants that spreads far outside the school into the wider community. It brings children into the decision-making process and makes them responsible for their decisions and actions. 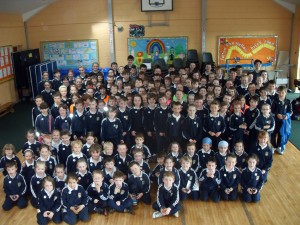 A Green Flag is awarded to a school every two years and Ransboro National School were awarded their fourth Green Flag in June 2012. This flag was awarded for all the work completed in the school on the theme of travel and on efforts made by the school to create awareness about the impact of modern means of transport on the environment. “WOW” days were held (Walk on Wednesday), children were encouraged to cycle to school and if coming by car was essential, families were encouraged to car pool. Although our surrounding area is rural, and roads do not allow for footpaths, many children embraced the effort of the school to promote more environmentally-friendly means of coming to and from school.

Previously our school had been awarded Green Flags for Recycling, Energy Conservation and Water Conservation. Since then, the school has also achieved Green Flag status for Travel and Biodiversity. All of these projects had a direct positive impact on creating a more environmentally sustainable school. 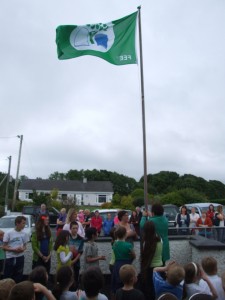 We are currently working on attaining our sixth Green Flag which is on the theme of Global Citizenship, Litter and Waste. As part of our work on this flag, we surveyed the pupils in the school and where either they or their parents come from outside of Ireland. The findings of the survey are on display on a global map on our Green School’s Noticeboard.

Fourth Class also examined Fair Trade as part of their Irish Aid projects. They surveyed pupils’ awareness of Fair Trade Products, where they can be purchased and the benefits of them to farmers/producers in the Developing World.