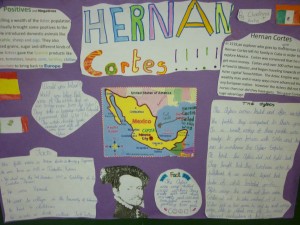 In History we have been learning about the life of Marco Polo. Marco was a famous 13th century explorer who was just 17 years old when he set off on a voyage to China and Mongolia. It was 22 tears before Marco returned home to Venice. His stories about what he had seen on his travels were so amazing that many people did not believe him. Some years later, Marco recorded these stories in his book ‘The Travels of Marco Polo’.

This led us to investigate the lives of other famous explorers and adventurers from history. Each group chose one famous explorer to research and compile a project on. Some of the explorers chosen were Ferdinand Magellan, Nellie Bly, Tom Crean, Edmund Hilary, Christopher Columbus, John Cabot and Neil Armstrong and Hernan Cortez. Each group then gave a presentation to the class  based on their project.