Our visit to Carrowmore

In  September 5th and 6th classes visited Carrowmore megalithic cemetery. An archaeologist named Padraic gave us a tour of the site. We learned lots of historic facts about this area.

The tombs were created from 3500bc to 4000bc by men to honour their dead. The bodies were cremated in an oak and hazel fire until they were nothing but bones, which could have been done to make sure wolves or other wild animals didn’t dig up the tombs and eat the bodies.

The tombs at Carrowmore are passage tombs. We looked at other tombs  in class; Portal, Court and Wedge tombs. Knocknerea is the biggest unopened passage tomb in the world.  It is believed that Queen Maebh is buried there. As well as a burial site Carrowmore was much more,it was a very important place for meetings, ceremonies and festivals.

In 1837 George Petrie numbered  the tombs 1 to 62.  About 25 tombs have been destroyed for agricultural purposes and wall building. George Petre stayed in Rathcarrick house which is now owned by my family and he opened a skylight because it has a view of a tombs.

Here are some of the pencil and charcoal drawings of a dolmen we drew in Art class. 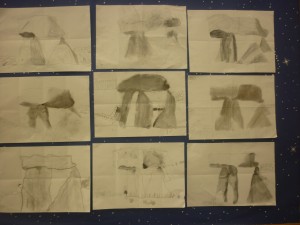