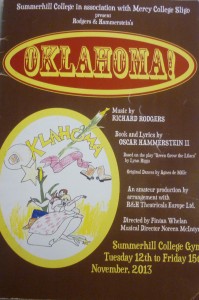 On Wednesday the 13th of November,3rd class to 6th class went to Summerhill College to see the Summerhill and  Mercy students perform the musical ‘Oklahoma’. We all went on the bus to Summerhill and we entered the hall. There was a stage at the front. On the stage were a few pieces of scenery. The two main pieces were an old-looking house and a rocking chair. There were lots of schools watching the musical as well as us. After a while, the musical began. The main characters were Curly, Laurey, Aunt Eller, Jud Fry and Ado Annie. The singing was very good and the acting was good too. There was an orchestra beside the stage that played really well.

After a while, it was the interval. Everyone was excited to see the rest of the play. At the end of the play, when all the actors were bowing, everybody clapped very loudly. The actors sang a few of the songs from the musical and we all sang along. Sixth class in Ransboro even gave the actors a standing ovation. On the bus ride home, everyone sang ‘Oh What A Beautiful Morning’ which was from the musical. It was a really great day out which everyone enjoyed.