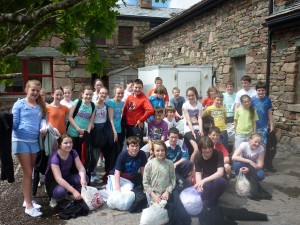 On Tuesday June 11th, 6th class went on their final school tour to the Delphi Adventure Centre in Leenane Co. Galway with Ms Hynes and Mr. Quinn. We stayed overnight and we did five activities while we stayed there – raft-building, forest walk, kayaking, zipwire and rock climbing/abseiling. 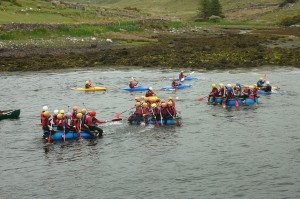 We left the school at 10am and arrived at the centre at 12.30. When we arrived there we met our instructors and they showed us where our rooms were for the night. We went to the conservatory where we were split up into our three groups. Our first activity that afternoon was raft-building. We first built our rafts in groups on the pier near the centre using planks, barrels and ropes. Once we had completed the rafts, we put on wetsuits, lifejackets and helmets. We then put the rafts into the water and climbed aboard. We did a series of challenges while in the water which we completed successfully. Some people fell into the water but it was good fun.

After our first activity we had dinner in the canteen which was a tasty chicken curry. After dinner we changed clothes for the forest walk. While on the walk we played games called Sniper, Tip the Can and a Tyre Puzzle game. Some people got really mucky on this activity! After showers, we watched a DVD in the conservatory while drinking hot chocolate or tea. When the movie was over, we went to our rooms and retired for the night.

On the second morning we got up at 7.30am, packed our bags, cleaned our rooms and went down for breakfast. After breakfast we were split into two groups. The first group went kayaking in the water off the pier. The group was split up and each group did a different series of games in their kayaks.

The second group went rock climbing and on the zip wire. The zip wire was about 100m long and was stretched over a swamp. It was great fun and a lovely feeling flying through the air. The Rock Tower was about 10m high. We were wearing harnesses and helmets and we were attached to ropes so it was very safe. The instructor belayed us from the top of the tower and then we abseiled down the other side. We returned to the centre to have lunch. In the afternoon the two groups switched activities. We took lots of photographs of us enjoying each activity. 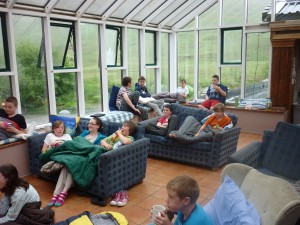 On the way home we stopped in Mc Donalds in Castlebar for a meal. We arrived home safely at 8.30pm, tired but happy! We had a great time.