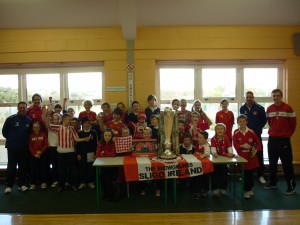 On Wednesday the 7th of November, our home team, Sligo Rovers came to our school with the Airtricity League trophy which they had won the month before.

So on Wednesday morning, almost everyone in the school wore red. People were coming in with small and big flags, banners and especially a lot of Sligo Rovers jerseys were being worn. The teachers told us that they were coming just after lunch which was just after 1pm. The sooner one o’ clock got closer, the more exited the pupils became. So at big break, everyone was on look out for whoever was coming with the trophy.

Then suddenly, two cars pulled up at the school. All the children wern’t sure if it was the trophy or a visitor. One man got out of the car and then everyone knew that it was the trophy. In one car was Maurice Monaghan – First team Coach, and also Jeff Henderson – Right back (Defender). In the other car was Richard Brush – Sub goalkeeper, and the next man that came out of the car as everyone went mental, was Ian Baraclough – First Team Manager. Then the bell went and everyone got into their lines. There was a couple of people who went to the Sligo Rovers matches and they knew the songs that the spectators would sing so they started to sing “Stand Up For The Bit O’ Red!”

Everyone started singing it as well. Before the Sligo Rovers people were surrounded by children, they went into the school quickly, but we all still sang the songs. The teachers came out to collect the children and they all went straight into the school hall. 6th class were at the very back and the other classes went in front of 6th class. The teachers said that 6th class were the best singers and they had come with the songs to sing.

Then when all the children were in the school hall, 6th class got ready to sing and the Sligo Rovers team were ready to come into the hall. Mrs. Clarke came into the hall and said “Get ready to shout for the Bit O’ Red!” and that was 6th classes queue to start singing. One half of 6th class shouted out “Red Army!” and the other half shouted “Red Army!” and then the rest of the school joined in with the second half of 6th class.

Once we were at our loudest, the team came into the hall. As they entered the hall they were met by a sea of red and a noisy welcome from the students and teachers. They went up to the front and sat the trophy on a Rovers banner which was on a table. There were chairs assigned to the team that showed up with the trophy. Mrs Clarke introduced the visitors and then some of the pupils asked the players and management questions. Mr Quinn took pictures of each class with the guests and cup. Many of the children also got autographs.They allowed us to have about a ten minute interview with the team. After the interview, the teachers wanted class pictures with the team and the trophy, and whoever brought in their signature stuff could get them signed after their picture was taken.

It took about a half hour to get all the pictures taken. When it was 6th class’s turn, they got a couple of pictures taken and after they were taken, everybody in 6th class wanted an autograph. While the pupils were getting their autograph, the teacher got some self-pictures. When we asked all the pupils in the school the next day how it was, they all said that they loved it or they thought is was class…

View the full Gallery of Photos of the Rovers Visit HERE