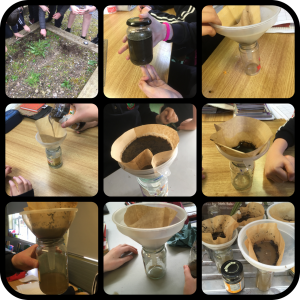 We went to the organic garden and half filled jars with clay. We then added water to the jars and mixed the clay and water together.

We then tested putting the water through another clean filter to see if the water would become less cloudy. The majority of the class then predicted that the water would remain the same. The water filtered faster than previously but it still remained cloudy and undrinkable.