Recently I have become more interested about the lost barrow at the back of the school. I was so eager to learn about the barrow I set up an interview with former parent association group member. Otherwise known as my mum Bernice Guckian.

1- When did you discover the lost barrow?

– Back in April 2015 the parents association were asked to help to prepare an enclosure at the back of the school as a nature walk or path for the children. But there was an understanding that the area we were planing to put the path was possibly a protected area as it had never been build on. So we were asked to look into the area. And that is how we were introduced the the lost burrow.

2-How how long has the barrow been here?

– With parent Andrew Whitfield ( Who is a doctor of archaeology ) and some more research we learned that the barrow possibly dated back to the Iron Age. Which is over 2000 years ago.

3-What is exactly is the Barrow?

4- If you somehow got inside the Barrow ( even though it is underground ) what would you find?

– This barrow as of to day is unexplored so who knows? The possibilities are endless. It could be home to the remains of our ancient ancestors. Or it could simply contain old tools, weapons and relics of that time.

5- Is the government or any political group involved in the Barrow project?

-We originally contacted the Sligo heritage officer who was extremely helpful and positive towards the project and it’s many educational opportunities. Plus we have had valuable support from N.U.I Galway who have provided a talk to our school when this project began on archaeology. That was a day to remember. Also they provided the school with equipment to map out the area. This called a geographical survey.

6- Why is the barrow special?

7- If you could continue your work on the barrow what would be your first move? 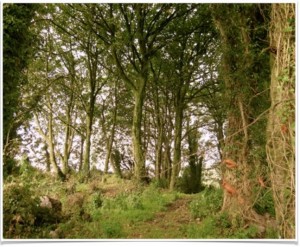