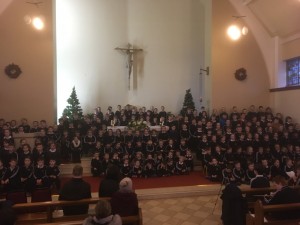 Our annual Christmas Carol Service took place in Ransboro Church on Tuesday December 20th. All pupils from Junior Infants to 6th class took part in the service. The service told the story of the Nativity, interspersed with carols, both traditional and modern.

At the end of the service, there was an announcement of the winners of raffle prizes. A full audience enjoyed the children’s singing.

As part of the service this year, we broadcast the event live via our Twitter account. A small group of viewers were able to watch the service on the live broadcast, including grandparents of pupils living abroad. This may be something we will look at trying again for other school events.