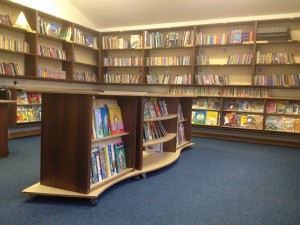 The school library was completed as part of the 2001 extension of the school. It gave a great focus to reading and was in constant use by all of the classes. In 2011, with the help of the Parents’ Association, a library management system was provided, allowing the entire stock of books to be computerised. This system enabled a much more efficient system of lending where pupils themselves could scan a library book to make a loan or to return a book.

In 2013, the library was temporarily decommissioned to accommodate the opening of The Glen while the new building was under construction. All of the books were packed into boxes and stored away.

On completion of the new building, it was decided to take the opportunity to redevelop the library and give it a new lease of life. Spearheaded by some parents, the revamp of the library took place during October and November 2015. Through sponsorship of shelves by parents and others, the library was given a complete makeover – it was completely painted; new shelving units and display units were specially constructed; a new digital projector and and speakers have been installed to allow classes to view movies or educational content on the internet.

The opening of the school library in 2001 coincided with the tragic passing of a fourth class pupil of the school, Brian Gilligan. As a tribute to his memory, a portrait to Brian has adorned the wall of the library since then. As part of our Official Opening ceremony, we re-dedicated the new library to the memory of Brian Gilligan.

The following video charts the development of our school library showing images of the original library, the temporary Glen and the redevelopment project.