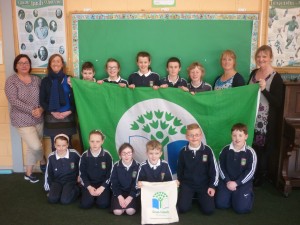 On the 19th of May, Anna, Cormac, SNA Mrs.Nearn and Mrs. O’Rourke, representing our  Green School Committee, went to Claremorris to receive the Biodiversity Green Flag . The Green School Committee have been working so hard over the past few years to earn this flag. They have surveyed the school about biodiversity,mapped the school grounds at the start and again in April 2015 showing new features like the herb garden in the Glen, the bird feeder and bat box.They have presented  lots of assemblies on the biodiversity theme.

All classes have increased their awareness of biodiversity and how we can care for our environment. Each class did a project on  a particular area of biodiversity,for example 6th class  surveyed birds in our school yard, 5th class cared  for the organic garden,2nd and 3rd examined animal life round the school, 1st class planted sunflower seeds and Senior  Infants examined animal habitats and the life cycle of the frog while Junior Infants looked at the life cycle of the butterfly. Most classes did mini-beast hunts and Senior classes did outdoor nature trails also.

When the committee members got to Claremorris to get the Green Flag, first there was an introduction and they were talking about the different  Green Flags you could get. We were told about the huge impact Green Schools   have made since it began in schools, that the energy saved in Ireland could send rockets to the moon eleven times.Then they were awarded each school  the Green Flag. Next there was a buffet for all the participants. We  then came back to Sligo and showed the flag to all the school.We will elect a new committee in September and work towards achieving a flag for global citizenship. 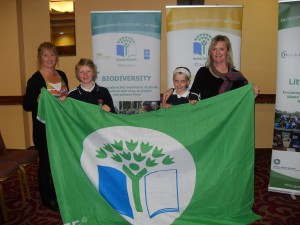 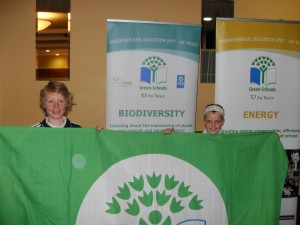 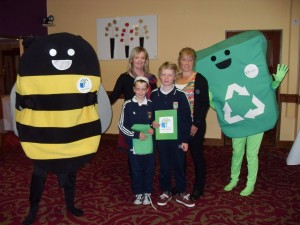