On Wednesday 22nd January the boys in fourth class participated in a futsal competition in Sligo IT. They played very well and were unlucky to be knocked out on penalties in the semi-final.

“The futsal was great fun. It helped us work together as a team. It is a game that moves fast and needs skill and speed. This game is played with five on a team; one of these is a goalkeeper. This year our team came third and were knocked out by a penalty shoot out.” Jaime

“Last Wednesday Miss Wetherald , I and 9 other boys from 4th class went to a futsal tournament ran by Sligo Rovers player John Russell. We had an objective of winning because we thought we were good enough. We were beaten by Calry in the semi final on penalties. We all agreed that we had a great time.” Ryan G 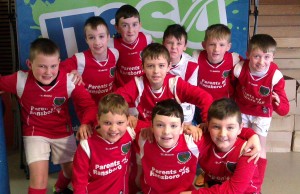 “We went to a futsal competition on January 23rd. There were ten of us, all determined to win a few matches. There was a lot of hustle upstairs where everyone that wasn’t playing waited. Soon we got to play, we were in group three. We had a great day and got to the semi-finals where we knocked out on penalties. It was a grand day and we all enjoyed it and would do it again.” Sam

“On Wednesday 21st ten people from fourth class went to the futsal competition in Knocknarea Arena in IT Sligo.  There was about 18 teams in it and we came third. It was great fun and I hope to do it again.” Mark

“I had a good time at the futsal competition. We were knocked out in the semi finals. I had a lot of fun and we got our ball signed by a Sligo Rovers player. We came third in the competition.” Evan 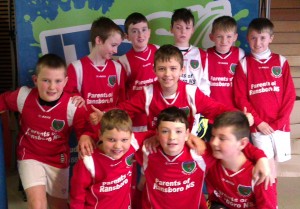