Some of the girls from 3rd and 4th classes participated in a 5 a-side futsal tournament on Tuesday 20th January. The day was arranged so they played as many matches as possible giving them a great opportunity to try something new. This is what some of the girls had to say.

“We played futsal in the IT on Tuesday 20th January. We played against many schools, here are some of them Strandhill, Scoil Ursula, Calry and Rosses Point.” Áine

“Futsal is like soccer except the ball is heavier. Futsal is a five a-side game one goalie, two defenders and two forwards” Lisa

“Futsal was really fun. I really enjoyed it” Eva

“Futsal is played with a ball that is not bouncy. We played the games at the IT.” Brooke

“The competition was very enjoyable. We played six games and I was very happy with what we did at the futsal competition.” Orna

“The futsal was great.” Zara 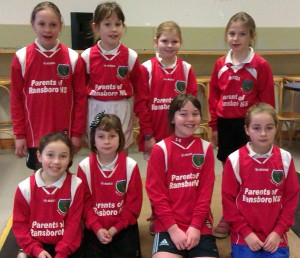