We looked at “The Scream” by Edvard Munch. We also looked at what influenced his paintings. Edvard’s mum died of T.B when he was a child and his sister also died young. Edvard’s dad was very religious he told Edvard that his mum was looking down on him from heaven. That would scare a young child. 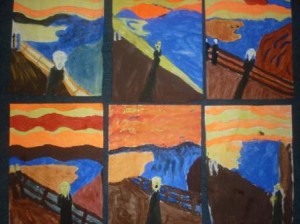 Edvard was out for a walk overlooking a fjord and he saw a sky blood red in front of him. When he was painting The Scream he painted the clouds and sky a blood red colour. There was a volcano in Indonesia and that caused the red sky over Scandinavia. We think he might be screaming out at the way the environment is being treated. We also think he might be screaming out at the fighting in the world since he was alive during World War 2.
We talked about what made us scream. We said that spiders, if someone scares you, a scary movie and roller coasters might scare you. We did a painting of the scream in art class. We enjoyed it.