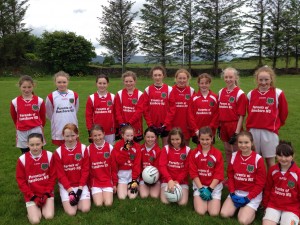 Commiserations to our Girls’ Gaelic football team who were narrowly defeated by Grange in an enthralling county semi final on Thursday 5th June.

Ransboro started the game strongly and raced into a 2 0 lead after a few minutes. Grange pulled back a point shortly afterwards but Ransboro continued to dominate possession  and soon added on another score.  Several chances were missed by Ransboro and Grange added on another point from a free just before half time. At the interval Ransboro were somewhat unfortunate to only be leading by a single point.

In the second half Grange came into the game strongly and began to take control. Ransboro defended superbly however and both teams found score hard to come by. Grange scored 3 fine points in the half while Ransboro were unlucky with a number of efforts narrowly off target.  The final score after an extremely competitive but sporting match was Grange 5 Ransboro 3. Congratulations and best wishes in the final to Grange who were worthy winners in the end.

Cogratulations also to all the girls on the Ransboro team. They have enjoyed an excellent year with significant victories over Carraroe, Ballymote and Ballsodare. Well done on a fine achievement in reaching the semi final of the competition.