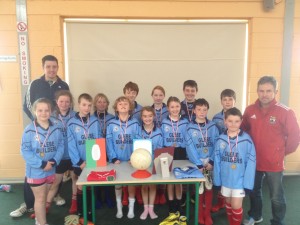 Over the last number of weeks, Ransboro NS hosted a very successful in-school Gaelic football league. 72 pupils from 3rd to 6th class competed in the league, with the emphasis on participation and enjoyment. The pupils were divided into six teams of twelve with each team representing a county.

After six lunchtime group games and two semi-finals, “Mayo” and “Galway” qualified for the Grand Final. The final was played in perfect conditions in Ransboro Park in front of a large crowd of expectant parents, teachers and pupils on Friday April 11th.

After a keenly contested, but low-scoring, first half, Galway led by one point to no score at half time. The game burst into life in the second half and with just five minutes left, the score read Galway 3 Mayo 2. However, a strong finish by the Galway team saw them emerge victorious on a final scoreline of Galway 6 Mayo 2.

Afterwards, at a presentation in the school hall, all the players were awarded with a medal for their efforts. The team captains, Jack Molloy and Stephen Lynch, were also presented with a Coolera GAA hoodie, kindly sponsored by the local club. 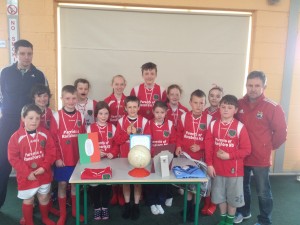