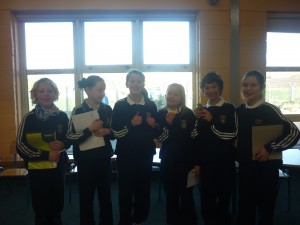 On Friday 22nd of November some children from the Sligo School Project came to our school to debate against 5th class. The motion was Homework Is a waste of time.” Ransboro said it wasn`t a waste of time and the Project said it was a waste of time. There were two timekeepers  on each schools team and there was a captain and two more people on each team also. At the back of the hall there were two adjudicators. Sixth class came to watch also.

To start the captains of the teams spoke first and then the other children on the teams spoke. After that there was a quick fire round where the teams fired questions at the opposing team and the other team had to try and answer the questions. Then the captains did a closing speech. When it was time for the adjudicators to decide who won, the audience got to ask the teams some questions. After a while the adjudicators made their decision. They congratulated both teams and then they said that Ransboro had won and were through to the next round.