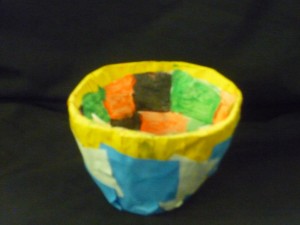 We have been making papier mache over the past few weeks. We had to bring in a bowl or vase covered in cling film to use as a mould. We used cling film to prevent the papier mache from sticking to the bowl. We used a mixture of PVA glue and water to stick strips of newspaper onto the bowl. We had to put an average of four or five layers of newspaper to make the bowl hard. We had to bring the bowls home over the weekend to let them dry.

When they were dry, we took them out of the bowl and brought them back in to school. We were surprised at how hard the bowls were considering it was only made of newspaper. A few days later we stuck a layer of either sugar paper or white paper onto the bowls and let them dry again. When they were dry, we painted the bowls in whatever pattern we wanted. They are now on display at the bottom of our classroom. We enjoyed making the bowls.

This is a video we made of the bowls.