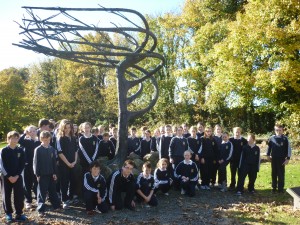 Before Hallowe’en, we went on a trip to a Famine Graveyard after swimming. We went there because we are reading the novel “Under the Hawthorn Tree” in class. The book is set during the Great Irish Famine 1845 – 1849. The main gate was locked so we had to use the entrance through St. John’s Hospital.

The main gate was designed by an artist to show the circle of life. The skulls on the top represent the dead people buried inside and the vines growing from the bottom symbolise rebirth. The pillars on each side of the gate were made of stones from the Workhouse walls which was situated where St. John’s Hospital is now.

There was a sculpture of a bronze tree near the entrance to the graveyard. The tree is a symbol of importance from Celtic times and the boulders at the base remind us of Celtic burial ways.

There are two separate sections in the graveyard – the main section and the children’s burial ground. In the main section, there are possibly thousands of people buried. There were lots of unmarked graves. Some of the graves were marked with stones and boulders. In the children’s graveyard, there was a circle of stones with a Celtic cross and shells on the inside. There was a recent burial there dated 1999.

We learned a lot from our trip to the graveyard and how so many people died during Famine times. We all thought that it was interesting but sad.