Tag Rugby in the School. 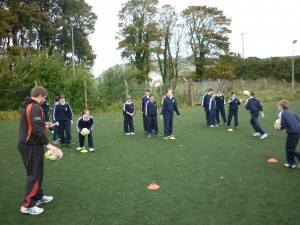 Today and for a couple of weeks on Monday, 5th class and 6th class started Tag Rugby.  6th class started first at ten O’ clock until ten thirty. 5th class then played tag rugby from ten thirty until eleven O’ clock. We played tag rugby on the astro turf. Once we came out onto the astro, the coach told us to stand in a straight line in front of him. He put us into groups of four or five and assigned us to a cone that was on the astro. The cones were about three or four metres apart from each other.

There were eight cones altogether. The coach told us to split in half and put two or three pupils at each of the cones and gave a size three rugby ball to four of the leaders at the one of the cones facing each other. He showed us how to do a pop pass. A pop pass is where you have the ball and you pass the ball by pushing it upwards and making sure it reaches the other person. We did the pop pass for another few minutes. The coach then shouted, ” ok lets have a game of rats and rabbits”. Half were rats and half were rabbits. We only did a very quick game and then he said ” right, for about five minutes we will have a light game of touch rugby.” We all cheered. The rats were against the rabbits. The rats won by one try. All of 5th and 6th class said that they really enjoyed it!