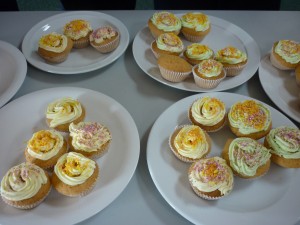 Some boys and girls were gone to an athletics fest today and there was a group left behind. Our teacher said that the people left behind could do something fun. We were split up into two groups of eight. One group went into the kitchen in the hall to bake while the other group worked quietly.

The first thing we had to do was to wash our hands for hygiene. Then we put on our aprons and set to work. We put butter, sugar, self-raising flour, eggs and baking powder into the mixture. We mixed it up with an electric whisk. We then spooned the mixture into the bun cases and popped them into the oven. We left them to cook for about 25 minutes. We took the cup cakes out of the oven and put them onto cooling racks to let them cool.

After that the other group made another set of buns. Then we made some butter icing which we flavoured orange and coloured with green food colouring. We put the icing into a piping bag and piped swirls onto the buns. Then we put delicious, multi-coloured sprinkles on them. We took great pleasure in eating them. There were some cup cakes left which we shared with the people who came back from the athletics fest. We also gave some to the other teachers. They were delicious! We loved baking them.